That tea is the second most widely consumed drink, after water, is a claim that has been made often. Surprisingly often, especially recently. And although a very wide variety of writers and authorities have made this observation in recent years, the claim is made without offering any real evidence. So my questions are: what does it mean, what is its history, and is it true?

It has been made by, amongst others: the Tea Association of America, the Food and Agriculture Organization of the United Nations, CNN Traveller, The Economist, Fox News, USA Today, The New York Times, Travel + Leisure magazine, the Australian Broadcasting Corporation, and also Wikipedia. The claim has also been made by a lot of scholars, including Alan Macfarlane, Yvonne Wrightman, Innocent Awasom, and Alastair Hicks. The evidence for this is all listed at the end of this blog, where it can be seen that each time the claim is made, the language and rhetoric remains uncannily similar. The phrase is a meme — a cultural element transmitted by imitation from person to person within a culture — that seems to have grown stronger by being repeated almost verbatim.

The claim that tea is the second most widely consumed beverage in the world, after water, does in fact have a long history. It was first made in the article on ‘Tea’ by John McEwan in the Encyclopedia Britannica published in 1911. The Eleventh Edition of the encyclopedia was the high water mark for this great work of the British enlightenment: at 29 volumes, it was the longest and most detailed edition ever published — and certainly the best encyclopedia ever before the arrival of Wikipedia. ‘Tea’ was John McEwan’s only entry: at the end of it, he said:

Next to water tea is the beverage most widely in use throughout the world as regards the number of its votaries as well as the total liquid quantity consumed.

John McEwan was a gentleman scientist of London, residing at 10-11 Lime Street EC. He was a Fellow of the Royal Geographical Society and the Royal Meterological Society, and was later a Trustee of Birkbeck College. He had written an essay ‘The Geography of Tea’ for the International Geographical Congress held at Berlin in 1899, part of which were later printed in The Tropical Agriculturist — but he didn’t make the claim there.[1] After his article was published in the encyclopedia, it was repeated by various newspapers and magazines, for example the Saturday Review in 1918.[2] And in 1951, keeping the meme alive through the mid century, the great Stanford economist of the tea and coffee trade, Vernon Wickizer, said ‘‘Today, next to water, tea is undoubtedly the most widely consumed drink’.[3] The next time it appears was in the 1990s, quoted by Yvonne Wrightman in her book All the Tea in China (1994).[4] So the claim has a long history, and isn’t ‘news’, or new news anyway.

Is it true? This is difficult, because no-one really knows how much water is consumed in the world. How the consumption of water might be measured is unclear, although it seems logical that more water is drunk than anything else, especially as it remains one of the most accessible and free liquids available to the great mass of people on the planet. So we should accept that a lot of water is drunk. This is a reasonable supposition given that humans need about one gallon of water a day to stay alive (not all of which has to be drunk as water, obviously, or even consumed as a liquid). Nonetheless, it is a reasonable assumption that water is the most consumed drink in the world, even without quantifiable evidence. But is tea the second most consumed drink after it? Market analysts at Euromonitor, a London-based market intelligence agency, have recently estimated that the market for hot tea was estimated to be worth over 40 billion US dollars per annum, compared to that for coffee at 80 billion US dollars, nearly double that for tea.[5] In terms of volume, this represents sales of 4.8 million tonnes of coffee, and 2.4 million tonnes of tea, again about double. So it would seem that by volume and by value, coffee is the winner over tea. But converting these quantities into cups of each beverage, tea may be consumed in greater quantities. If we assume — in a back of the envelope style calculation — that coffee uses around 50 grammes per litre, and tea 20 grammes per litre, these volumes equate to 96 billion litres of coffee, and 120 billion litres of tea, per annum, in this world. That’s a lot of tea: about 68 cups per person per year for everyone on the planet.

So the claim may be true, but probably only if we are prepared to hedge it around with qualifications, and only if we treat all tea as one beverage, while still dividing ‘soft drinks’ into sub categories like Coca Cola, Sprite and Irn Bru. Turning ‘tea’ into a single brand, in fact.

And what does it mean? The claim that tea is the second most widely consumed drink in the world, after water, does a couple of things. It reinforces the wide and global appeal of tea, advertising its cultural centrality on every continent, even if it is prepared and consumed quite differently in different places. It also makes it seem natural, like water, a substance we recognize as essential to human life. And it is a claim that makes tea seem more important than coffee, its great rival through the centuries, even though the coffee trade has more volume, and more value.

‘Next to water tea is the beverage most widely in use throughout the world as regards the number of its votaries as well as the total liquid quantity consumed’. John McEwan, ‘Tea’, Encyclopaedia Britannica; A Dictionary of Arts, Sciences, Literature and General Information, 11th edn (Cambridge: University Press, 1910-11.

‘Next to water, tea is the beverage most widely in use throughout the world, as regards the number of its votaries as well as the total liquid quantity consumed’. ‘Concerning Tea’, Saturday review of politics, literature, science and art (Sep 21, 1918): 863-863.

‘Next to water, tea is the world’s most popular drink’. Yvonne Wrightman,. All the Tea in China: Fascinating Traditions, Incredible Edibles (Bramalea, Ont: Author’s Hall, 1994), p. 6.

‘Tea is now more ubiquitous than any other type of food or any drink apart from water’. Alan Macfarlane and Iris Macfarlane, The Empire of Tea (New York, NY: The Overlook Press, 2004), p. 32

‘Tea is the most widely consumed beverage in the world next to water, and can be found in almost 80% of all U.S. households’. ‘Tea Fact Sheet—2013’, Tea Association of the USA Inc http://www.teausa.com/14655/tea-fact-sheet

‘After water, tea is the most widely consumed beverage in the world’. Second sentence in the Wikipedia essay. http://en.wikipedia.org/wiki/Tea

‘Next to water, tea is the most widely consumed beverage in the world.’Anahad O’Connor, ‘Really?: Adding Milk to Tea Destroys its Antioxidants’, New York Times, September 17, 2012, http://well.blogs.nytimes.com/2012/09/17/really-adding-milk-to-tea-destroys-its-antioxidants/?_php=true&_type=blogs&_r=0

‘As a beverage the worldwide consumption of tea is surpassed only by water’. ‘Caffeine’, What’s Your Poison, Australian Broadcasting Corporation, 1997,http://www.abc.net.au/quantum/poison/caffeine/caffeine.htm

‘Tea began its journey towards becoming the most widely consumed beverage in the world, after water, some 5 000 years ago’. Food and Agriculture Organization of the United Nations, ‘Smallholder tea producers benefit from harmonized safety standards’, FAO Intergovernmental Group on Tea, 2014 http://www.fao.org/in-action/smallholder-tea-producers-benefit-from-harmonize-safety-standards/en/

‘Tea is the second-most popular beverage in the world, after water.’ ‘America’s tea revolution: A nation rediscovers its old drinking habits’, The Economist, Oct 24th 2013, http://www.economist.com/blogs/schumpeter/2013/10/americas-tea-revolution

‘Tea is the most frequently consumed beverage around the world other than water’. ‘A Global Guide to the Best Tea’, Travel + Leisure, May 2012http://www.travelandleisure.com/articles/a-global-guide-to-the-best-tea

‘Tea is the most popular and cheapest beverage, next to water, in the world’. Alastair Hicks, ‘Review of Global Tea Production and the Impact on Industry of the Asian Economic Situation’, FAO, 2001 www.journal.au.edu/au_techno/2001/oct2001/article4.pdf

[1] ‘The Geographical Distribution of the Tea Plant in Growth, and of its Product in Consumption’, in International Geographical Congress, Verhandlungen des siebenten Internationalen Geographen-Kongresses, Berlin, 1899 (Berlin: W.H. Kuhl, 1901), II, 449-56. With a map.

13 thoughts on “‘Tea, the Second Most Widely Consumed Drink, after Water’ — a meme” 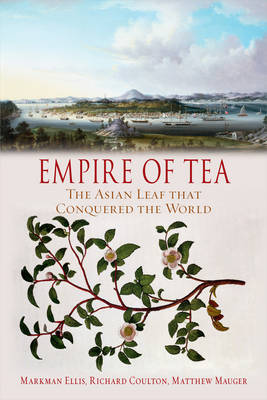